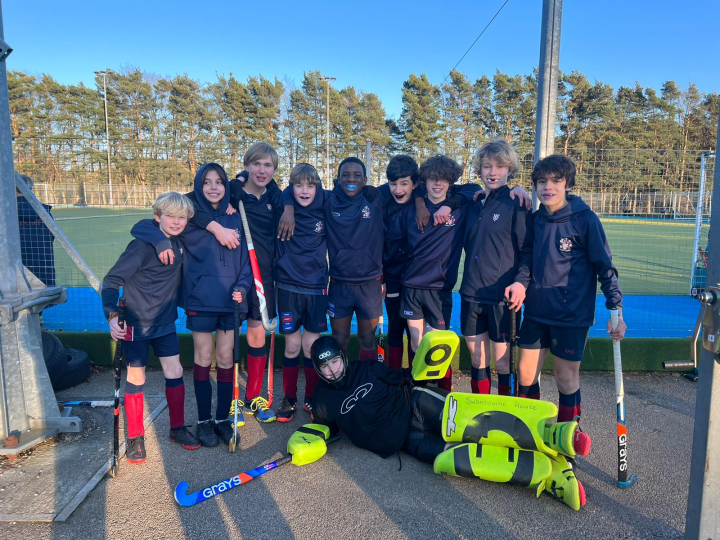 It was great seeing both our U11A and U13A Boys’ Hockey teams travel together to compete in the Stowe Tournament, especially in the glorious sunshine. We had several challenging teams in our pool and with it only being two weeks into the season, the newly appointed Captain led a thorough team talk to prepare the boys. The pool match results can be found below:

As a result of conceding minimal goals and with the importance of goal difference in tournaments, Swanbourne House School progressed to the Plate Semi Final against Northampton Boys School (NBS). It was a well fought game with chances from both Swanbourne House (SWB) and NSB. 5 minutes passed and the game ended with no goals from either team, which was due to go to penalties.  Unfortunately, NSB needed to travel back to school meaning that we could not play the penalties, so SWB automatically progressed to the Plate Final to face The Dragon.

I was so proud of the boys’ playing in the Plate Final, there was a fantastic fight and willingness to win the game with several scoring opportunities. Each player on and off the pitch was encouraging and helping their teammates and it was a delight to see. After 7 minutes, the game ended 0-0 which meant ‘Sudden Death Penalties’.  A special mention needs to go to the U13A keeper for his fearless saves and focus during the game and throughout the penalty flicks. Sadly, SWB lost on penalties but placing 2nd in the Plate after two weeks of playing Hockey is a fantastic achievement.

Swanbourne House is a private day and boarding school, near Milton Keynes for children aged 4 – 13 years. Foundation places for September 22 are now being booked. To discuss admissions and to arrange a tour, click here.