Learning a language not only promotes better global communication, but also cultural understanding. This applies as much to the ancient languages of Latin and Greek as it does to modern foreign languages.

All pupils from the 5s onwards have at least one French lesson a week with a subject specialist teacher. The earliest lessons involve songs, rhymes and simple vocabulary, advancing and leading to challenging 13+ Scholarship papers. There is a strong focus on the practical application of the language, with spoken French assessed from the 8s onwards. Children also have the opportunity to create presentations and displays to put their learning into practice, all of which is assessed in our PSB course in the 11s and Top Year. 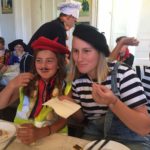 There are plenty of opportunities to utilise French language skills outside the classroom. At the beginning of the 11s, pupils have a week of French immersion in Normandy at Château de la Baudonnière which gives pupils a chance to test out their French in ‘live’ environments. The children take part in a variety of outdoor activities, all of which are carried out entirely in French, including the presentation of meals and a trip to a local market.

We work with a French theatre company that stages performances with the 9s and 10s, and we offer a variety of challenging language-based activities as part of the Top Year Leavers’ Programme.

We aim to promote a love of many foreign languages and cultures. Children in the 6s are introduced to Mandarin as part of the core curriculum and Spanish and Mandarin courses are available as part of our Saturday Enrichment Programme. In addition, a number of other languages are taught in bespoke one to one or small group lessons during the week.

Children in the 10s and below are encouraged to enter the UK Junior Language Challenge, which involves learning new languages via an app in this national competition.

Pupils begin to learn Latin in the 9s with one lesson a week and an emphasis on classical mythology at this stage. From the 10s onwards pupils have two lessons a week and a more rigorous approach is adopted. By gradually introducing linguistic structures, analysing grammatical content, and considering the roots of many English words, pupils are able to translate increasingly complex sentences from Latin to English and English to Latin. In the process they develop logical thought processes and an eye for detail. Independent thinking and learning is encouraged, as is collaborative work within the classroom.

By the Top Year, children are able to comprehend and translate passages of Latin confidently at CE level 2. This enables them to transfer to their senior schools with a thirst to take the subject further. The curriculum also aims to encourage a lifelong affection for the Classical world – its literature, history and culture, all of which have so profoundly affected our own. To this end, ad hoc visits to museums such as the Ashmolean are arranged, as is a triennial residential trip to the Bay of Naples and Rome. Pupils may opt to try Greek as part of the Saturday Enrichment Programme and Top Year may also be introduced to it in the Summer term after their final exams.